RSS
← Stop Trying in Your Own Power
Have You Met El Qanaa? →

First Impressions of the Holy Spirit 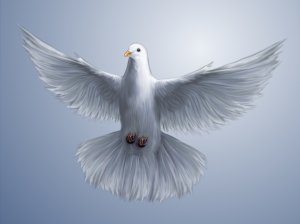 I believe that the church doesn’t acknowledge the Holy Spirit as it should. We don’t fully understand the blessing we’ve been given. We have the Spirit of the living God residing in us.

I wanted to delve deeper into understanding the Holy Spirit as a person. So I began to teach a series on the Holy Spirit in my Wednesday night Bible Study. As I began to study, the Lord started showing me things that I wasn’t prepared for.

What I found is going to be the subject of my next few posts. My hope is that it will lead you to a greater respect and understanding of the Spirit that lives within you.

As I said, I was studying what the Bible says about the Holy Spirit. Who wrote the Bible? Obviously THE HOLY SPIRIT! He used individuals to write it down, but the Lord breathed His Word through them to bring us the Scripture.

In thinking about what was written, I asked myself a question. What’s the first thing that the Holy Spirit says about Himself? After all, first impressions are the most important.

In my studies I’ve come to believe that the book of James was the first of the New Testament to be written.

In that short book there’s only one direct reference to the Holy Spirit and it took me off guard.

You adulterous people, don’t you know that friendship with the world is hatred toward God? Anyone who chooses to be a friend of the world becomes an enemy of God. Or do you think Scripture says without reason that the spirit he caused to live in us envies intensely?
James 4:4-5

We know that God the Holy Spirit wants to be your friend. But it’s interesting to see that the first thing He reveals about Himself is that you can’t be both His friend and the world’s friend.

Understand – you can have friends in the world. But the Spirit of God doesn’t want you to be a friend of the world system. We can’t be chasing after the same things that the world does.

The Scripture above literally says that the Holy Spirit is intensely jealous. This is a destructive jealousy to the point where He actively seeks to destroy whatever would try to steal the heart of those He loves.

He knows that you love Him. He knows the plans He has for you. He wants to bring you prosperity and health. He has a hope and a future destiny for you.

But at the same time He sees someone trying to steal your heart. Someone who has plans to ruin your life. Someone with a desire to steal, kill, and destroy.

My question is; if that’s the first thing He says, how important is it to Him? An even greater question is; how important does this seem to the church today? Unfortunately, I believe that we’ve lost this sense of the Lord’s jealousy.

That’s what I intent to write about for the remainder of this series.

Question: How does the knowledge of the Holy Spirit’s jealousy affect your walk with Christ?

Posted by Revzacc on April 3, 2015 in Power of God, Prayer, Revival

← Stop Trying in Your Own Power
Have You Met El Qanaa? →