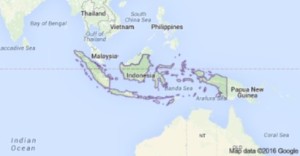 As many of you know, I just made a Vision Trip to the nation of Indonesia. A group of us were looking to partner with some church planters in that region. I’m going to take a few posts to talk about what we saw, did, and learned as we were on the island of Sumatra.

It was a very tiring trip. It took about 24 hours of travel time on three different planes. I found that it’s more exhausting sitting on a plane for six hours, than working at a job.

As I relate to you the stories about our trip, you’ll probably notice that I don’t mention any of the names of the people involved in the ministry there. That’s because Indonesia is a Moslem nation. Therefore, I don’t want the lives or ministries of these native workers to be in jeopardy. So they must remain anonymous.

Our Time in Medan

Sumatra is the sixth largest island in the world. We arrived at the city of Medan. It’s the largest on the island with 13.5 million people.

What first hit me was the “lostness” of the area. It’s a very dark place, spiritually. There are many Moslem, Buddhist, and Hindu influences in their culture. Of course, that doesn’t include the native tribal religions.

As I looked into the eyes of the crowds of people bustling by me, I was hit by the look of resignation in them. The average salary there would only translate to a few hundred dollars a year in US currency. It’s as if they know that their situation is not ideal, but they don’t see any way out of it.

But there’s more to the people of Indonesia than that simple snapshot. They are very warm and hospitable to visitors. Whenever they shake hands in greeting, they lightly brush their chest with their right hand. This means, “welcome; meeting you brings joy to my heart”.

We know that we are children of God, and that the whole world is under the control of the evil one.
1 John 5:19

It was a strange experience being in a country with a people who so obviously need to know Jesus Christ as their Savior. What’s so unfortunate is that we don’t view the USA in the same way.

I realized that the same zeal that I expressed to reach the Indonesians must be carried over to the US. We may be more affluent financially, but spiritually we need an awakening. My prayer is that my time away helped to magnify my commitment to make Christ known in my field of ministry.

Because of the freedoms we enjoy in America, it’s so much easier to share the Gospel with those around us. Unfortunately, it’s also easier to put it off and wait for someone else to do the job.

It’s time for us to wake up to the fact that we’re no longer in a Christian nation. If we don’t proclaim Christ, then no one else will.

We were met and taken around by a local church planting pastor. He’s a native of the area and a part of the Batak tribe. He wants to see God’s hand at work in his area.

He shared with us that the Batak people are very volatile. They’re known for having bad tempers. His was to the extreme. As a young man he was so aggressive that his village asked him to leave.

Later in his life he was looking for answers. At some point he received a copy of the Bible. He decided that he wanted to understand it so he read it from cover to cover.

For the wages of sin is death, but the gift of God is eternal life in Christ Jesus our Lord.
Romans 6:23

As he was reading through the book of Romans, he became keenly aware of his need for Christ. Without any prompting from anyone other than the Holy Spirit, he prayed and surrendered his life to the Lord.

Because of his study of the Scripture, he knew that he needed to be baptized in water. He went to one church and they told them that they only sprinkled.

As he walked along, he saw a crowd of people by a lake. He saw that they were having a baptism service. He asked if he could join in and be baptized. After the pastor talked with him a while and saw that he was truly saved, they agreed to baptize him.

I recently heard a quote from David Platt. “There’s only one thing worse than being lost and that is being lost and having no one trying to find you.” This pastor is an amazing example of God’s grace.

In spite of the fact that Indonesia is a Moslem nation, there are many Christian churches. The problem we saw was that many of them are mainline denominational churches with no desire to win the lost. They’re content to simply minister to those of their own congregation, or trying to get believers to switch to their church. The kingdom doesn’t grow that way.

What we saw was that even some of the evangelical pastors of that area are becoming concerned with external issues. They want to be like the churches around them. They are discussing whether they should start preaching in robes, and what color they should be.

We made it our goal on this trip to only work with pastors who understood the mission. There are millions of lost souls that need to be reached. That will not happen if we cling to church as usual, or chase after being acceptable.

Our Time in Sibolga

Halfway through the trip, we took a one-hour plane ride to the eastern side. We stayed in the town of Sibolga.

We were now in a part of Sumatra that few Westerners get to see. Let me give you an idea of what I mean. The 15 mile ride from the airport to the town took one full hour because of the conditions of the road.

Sibolga is a small town on the edge of the mountains. As a matter of fact, the first thing we did when we got there was to take the road into the mountains. There was a special site we wanted to get to.

I’m not exaggerating when I tell you that the roads we took looked like something taken from National Geographic magazine. They were narrow, winding roads, barely clinging to the sides of the mountain.

Two hours later we arrived at our destination. It was the place where the first missionaries to Sumatra (who were sent from Boston) were killed by the local Batak tribe. The Batak people now look back on that event with guilt and sadness. They have erected a memorial in honor of Lyman and Munson. That’s the picture at the top of this article.

But that brings me to the part we didn’t expect on this trip. This area is saturated with Batak churches. We came with the understanding that the area surrounding Sibolga needed the Gospel. So what was the problem?

He said to them, “Go into all the world and preach the good news to all creation.”
Mark 16:15

I believe that preaching the Good News of Christ to the lost is not optional for any believer. Whether it’s next door or around the world, we all have a part to play.

Upon learning about this spiritual dilemma in the work being done here, we made a decision. What we learned served to strengthen our resolve to support and encourage the new breed of church planters that God was raising up on Sumatra.

Their goal is to present the Gospel to the unreached people around them. It’s not in their agenda to fill their churches with pre-existing Christians. They passionately desire to see the Kingdom of God increase.

Along with that, I believe that God gave me a personal goal as well. I want to come back to the island with teams of 4-5 people who can help the missionaries in their evangelism projects. I can also be an encouragement to local ministers and theological students with practical training and teaching.

After our time in the area of Sibolga, we flew back to the Medan airport to wait for our flight home. Little did we know that the best was yet to come.

As we reflected about our time on Sumatra, we hadn’t made any earth-shaking discoveries. We learned about the culture. We were made to understand the spiritual climate and the needs of the people.

Apart from the learning curve of the mission field, everything went as expected. We met with missionaries, pastors and church planters who were doing the work of the ministry. We saw the depth of lostness in the regions we visited. We heard about the needs, desires, and vision of the work being done there.

All of this gave us a clear picture of the role we could play in helping them in their mission. We now knew about the teams that would need to be sent to aid in their evangelism. We understood the need they had for finances and other resources. This is normal for a vision trip to a mission field.

Then it happened. Something so far from our experience, that it totally took us by surprise.

A pastor from a church in the Medan area gave us an envelope. We opened it. He explained that after our visit, his church took a vote. They decided to give us a seed offering of 1,000,000 rupiahs toward the church planting work being done in the Boston area.

And now, brothers, we want you to know about the grace that God has given the Macedonian churches. Out of the most severe trial, their overflowing joy and their extreme poverty welled up in rich generosity. For I testify that they gave as much as they were able, and even beyond their ability. Entirely on their own, they urgently pleaded with us for the privilege of sharing in this service to the saints.
2 Corinthians 8:1-4

This verse could have been written about the church in Medan. We viewed them as a mission field – in need of our support. Yet they understood a spiritual truth that many churches in the USA need to learn.

They feel called of God to win the lost and plant churches in the unreached areas of their country. In order to accomplish that, they’ll need God’s power, provision, and ability. They understood the concept that if they plant good seed in good soil – even though that soil might be on the other side of the world – it will bring in a harvest for them.

WOW! To say that we were blown away by their gift would be an understatement. In spite of their need, they gave a sacrificial gift to us because they have a view of the global mission of the Gospel. I have absolutely no doubt that their faith will be rewarded.

I now have no reservations in working with these wonderful men and women of God. The Lord is definitely going to accomplish great things through the Sumatra-Boston partnership. I’m glad and grateful that I can be a part of it from the very foundation.