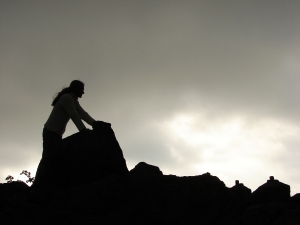 I’ve been posting about the offerings of Cain and Abel. What we’ve seen is that Abel was God’s designated prophet. If Cain’s gift was to be accepted, he had to bring it to Abel. This would have required Cain to humble himself.

“You mean I have to go to my little brother for God to accept my offering?”

The truth is that there’s only one way to worship God acceptably – God’s way. Cain had a problem with that.

The result was that Cain killed Abel. Cain’s thinking was that God wanted him to worship through the prophet. But what if there was no prophet? Then God would have to accept an offering from Cain’s hand.

Cain wanted to worship God on his own terms. He thought that God would have to accept his offering regardless of how he brought it. But that wasn’t the case.

Cain became the world’s first murderer. He was cursed for this sin.

What was Cain’s response?

Cain said to the Lord, “My punishment is more than I can bear. Today you are driving me from the land, and I will be hidden from your presence; I will be a restless wanderer on the earth, and whoever finds me will kill me.”
Genesis 4:13-14

Cain said that his punishment would be unbearable. Why? Not only was he driven from the land, but he would be hidden from God’s presence.

Does that sound like an angry, hardened reprobate to you? I don’t see any of that as he stands before God.

He is starting to understand his situation. He can no longer fulfill his calling – being driven from the land. He can’t find forgiveness in the presence of God. The only advocate that he could have gone to – Abel – is dead. It even dawns on him that he deserves death.

His answer to God sounds sorrowful to me. He sounds more humble that Adam and Eve did when they sinned.

This shows the mercy of God. The conversation between Cain and God still sounds like the interactions of a father and a wayward son.

We serve a God who always desires restoration over judgment. The outcome of this event is no different. Cain was sorry for what he had done. God had a remedy.

In my next post you’ll see how the story ends. It’s probably different than you think.

Question: How has God’s forgiveness affected your life?

Posted by Revzacc on March 21, 2016 in Spiritual Walk, Worship