The Living Water of the Spirit 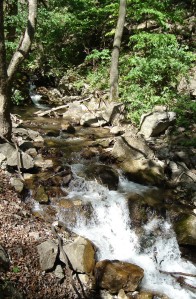 In my last post I talked about the woman at the well encountering Jesus. He talked to her about receiving living water. We saw that this was a concept found in the Old Testament.

The prophet Zechariah talks about living water in relation to the Second Coming of Christ.

On that day living water will flow out from Jerusalem, half to the eastern sea and half to the western sea, in summer and in winter. The Lord will be king over the whole earth. On that day there will be one Lord, and his name the only name.
Zechariah 14:8-9

“Sir,” the woman said, “you have nothing to draw with and the well is deep. Where can you get this living water? Are you greater than our father Jacob, who gave us the well and drank from it himself, as did also his sons and his flocks and herds?”
Jesus answered, “Everyone who drinks this water will be thirsty again, but whoever drinks the water I give him will never thirst. Indeed, the water I give him will become in him a spring of water welling up to eternal life.”
John 4:11-14

Jesus was not talking about natural water. In the original Greek, Jesus says that if you drink His water you will not never thirst ever. That might not be grammatically correct in English, but it’s very emphatic in Greek.

Why will you never thirst again? That’s because a spring of this living water will come up from WITHIN you.

What does this mean based upon the Old Testament Scriptures that we looked at? Jesus was saying, “I can place God inside of you.”

You need to understand that this was the last Gospel to be written. When the church received it, they already knew the testimony of John the Baptist.

And this was his message: “After me will come one more powerful than I, the thongs of whose sandals I am not worthy to stoop down and untie. I baptize you with water, but he will baptize you with the Holy Spirit.”
Mark 1:7-8

So the early church read this knowing that Jesus is the baptizer in the Spirit. What do Jesus’ words to the woman mean to us? If you ask the Lord, then you’ll be baptized in the Spirit.

The woman said to him, “Sir, give me this water so that I won’t get thirsty and have to keep coming here to draw water.”
John 7:15

The woman didn’t know it at the time, but she was operating in a Scriptural principle. She was placing a demand upon Christ. The Lord offered her an amazing blessing. She asked to receive it. That’s what it takes for a miracle to occur.

In my next post we’ll see what her need was, and how this blessing takes shape in her life.

Question: What are some blessings that you received by asking the Lord?

Posted by Revzacc on July 8, 2016 in Power of God, Prayer in the Spirit, Revival, Spiritual Walk