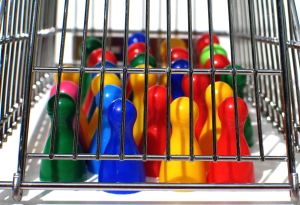 In my last post, we saw that Jesus proved, in a very powerful way, that He could remove sin in all of its forms.  As we continue in the Gospel of Mark, this ministry of Christ becomes clearer.

Once again Jesus went out beside the lake.  A large crowd came to him, and he began to teach them.  As he walked along, he saw Levi son of Alphaeus sitting at the tax collector’s booth.  “Follow me,” Jesus told him, and Levi got up and followed him.
Mark 2:13-14

In this passage, we see the Lord calling a new disciple – Levi.  I believe that this was his given name.  Later on, he’s called Matthew.  That’s probably the name Jesus gave to him.  It means the gift of God.

Remember, Jesus did this with a few of His disciples.  The Lord called Simon, Peter.  James and John became the sons of thunder.

But there’s an interesting point to this.  Both the name Levi and Matthew were strongly Levitical names.  That probably means that Levi was from the tribe of Levi.  He should have been training for the priesthood.  Instead, he was collecting taxes for the Roman conquerors.

Jesus had been teaching in the area.  Undoubtedly, Levi listened to Him and it spoke to his heart.  There’s no other reason why he would leave his lucrative position immediately when the Lord called.

Levi threw a dinner party to introduce Jesus to his friends and co-workers.  The Pharisees who were watching weren’t too happy about it.

You have to understand the thinking of that day.  Levi was seen as a Jew, taking money from his own people, and giving it to Caesar.  They viewed him much the same way as we would view a drug dealer today.

Not only that, but he has the same type of friends that a drug dealer would have.  Prostitutes, loan sharks, and the like.  All the people that the upstanding Pharisees would look down on as the dregs of their society.

Why would Jesus, a prophet who obviously operated in the power of God, ever associate with such rabble?

On hearing this, Jesus said to them, “It is not the healthy who need a doctor, but the sick.  I have not come to call the righteous, but sinners.”
Mark 2:17

Jesus has just proven Himself to be a remover of sin.  If your ministry is to remove sin, then your place is in the middle of great sin.  Jesus knew that He was sent to save these people.  The Pharisees may have written them off, but Jesus saw them as loved by God.

I always find it offensive when I hear a Christian remark that someone deserves hell.

“When they die, they’re gonna get what they have coming.”

That must break the Lord’s heart.  He died for everyone.  Not just the people we like.

We need to watch our attitudes about those without Christ.  The fact is that we all deserve hell – but I don’t want anyone to go there.

Even the most perverted, murderous, evil person on earth should be given the chance to hear about the life-changing work of Jesus Christ on the cross.  We should be representing Christ and His attitudes in our generation.

Question: Why is it so easy to pick up the same attitudes as the Pharisees?

Posted by Revzacc on December 22, 2017 in Legalism, Ministry, The Gospel