RSS
← Asking in God’s Will
Mercy for Healing → 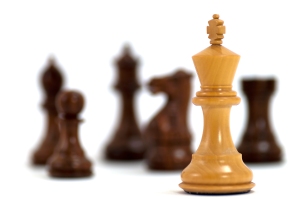 In my last post, we saw two of the disciples, James and John, trying to take leadership over the others.  Jesus explained to them that in the kingdom of God, your positions were prepared for you by the Holy Spirit.

The other disciples heard about it and started to get mad at the brother’s attempt at gaining power.  The Lord handled it by teaching them some kingdom principles.

When the ten heard about this, they became indignant with James and John.  Jesus called them together and said, “You know that those who are regarded as rulers of the Gentiles lord it over them, and their high officials exercise authority over them.  Not so with you. Instead, whoever wants to become great among you must be your servant, and whoever wants to be first must be slave of all.  For even the Son of Man did not come to be served, but to serve, and to give his life as a ransom for many.”
Mark 10:41-45

There are some good points that Jesus covers in this short statement.  I want to start with the most important one.  It’s the key to the whole passage.

The Lord concludes by using Himself as the example of service.  He came to serve the needs of others and to lay down His life for our freedom.  We miss the importance of this sometimes.

Christ didn’t simply do what He was told.  He didn’t let people push Him around.  He was a leader.  He instructed His disciples and even commanded them to do certain things.  Along with this, Christ served the needs of those around Him.

In explaining it, the Lord uses two levels of leaders.  Then He contrasts the world and the church.  He says that in the world, those who seem to be in charge lord it over them or make people do what they want them to do.

But there’s another level.  The really high officials exercise authority over them.  The word He used means to exercise privilege.  That means it’s all about what pleases me.  So in the world, leadership is communicating what I want done and what pleases me.

That’s not how the kingdom of God should be operating.  The two levels of leadership are completely different from the world’s way of operating.

Jesus starts by explaining how you become a leader.  It starts by serving.  This word literally means to be a waiter or an attendant.  This implies that you are not a slave to the one you’re serving.  Instead, you are serving people as instructed by the owner of the establishment.

Then, the next position is that of the top level of leadership.  Jesus says that to fit in there, you must become a bond-slave of the whole.  This is where we miss it sometimes.

As a leader in the body of Christ, I am not a slave to the Finance Committee, the individual members, the biggest tither, or even my denomination.  I am a bond-slave to the church of Jesus Christ.  My goal is to see the kingdom of God advanced.

That’s how Jesus fulfilled these roles.  It’s how we follow His example.  I’m not pushing my agenda or what makes me happy.  I serve others under the direction of the Holy Spirit.

If you walk in this attitude, then you’re ready for leadership in God’s kingdom.

Question: What are some examples you’ve seen of servant-leadership?

Posted by Revzacc on May 9, 2018 in Leadership, Ministry, Spiritual Walk, The Church

← Asking in God’s Will
Mercy for Healing →