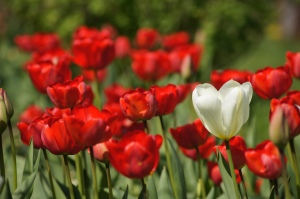 I’m continuing to look at Mark’s Gospel.  We’re now in the last chapter.  To many people, it’s a very controversial place.

Some versions of the Bible leave out Mark 16:9-20 altogether.  Others set them apart with a note that tells us that some of the most reliable manuscripts don’t have these verses.

Here’s my take on it, for what it’s worth.  Maybe I’m naïve or looking at the issue too simply.  I believe that if God is not powerful enough to protect His Word and keep it pure, then how can I trust Him to protect and watch over my life?

I see it as a matter of faith.  I believe that whatever the circumstances were that brought this section of Scripture to us; it was what God wanted to be recorded.  He could have stopped it from being placed there, but He didn’t.  So, I choose to believe that this was inspired by the Holy Spirit.

I know; there are some who take it out of context and use it as an excuse to do some strange things in the name of their religion.  But that doesn’t negate the truth of what’s written.

Jesus has just told His disciples to go out and proclaim the Good News of salvation to the world.  Some will not believe them, but others will, and they’ll be saved.

Now the Lord describes the signs that surround those who do believe.

“And these signs will accompany those who believe: In my name they will drive out demons; they will speak in new tongues; they will pick up snakes with their hands; and when they drink deadly poison, it will not hurt them at all; they will place their hands on sick people, and they will get well.”
Mark 16:17-18

The problem is that if you don’t believe God works miracles through the church, you’ll have to find a way to get rid of this verse.  I believe that God wants to show His power through us as much today as in the early church.  We just need to position ourselves correctly.

The key phrase is “in my name.”  In other words, Jesus is telling them that they will do these miracles in His place.  If it’s something that the Lord would have done, then His followers could do it.

But there’s a catch.  How did Christ perform miracles?  He was clear that He only did what He saw of the Father.

This means that I can’t just decide on my own to pick up a snake, drink poison, or even heal the sick without hearing from the Father.  I need to spend time with the Holy Spirit.  I must develop a sensitivity to His voice.  Then, if I operate in obedience to what the Lord tells me, I’ll truly be functioning “in His name.”

That’s important.  I can’t just do what I want and tack “In Jesus’ name” to the end of it.  That gets me nothing.  I have to be operating under the authority and direction of the Lord to see the miraculous.

Do you want to see the signs, wonders, and miracles of those who believe?  Then spend quality time with the Holy Spirit.  He’ll train you to walk the way Jesus did.

Question: Why don’t we see miracles in our churches today as they did in the early church?

Posted by Revzacc on September 17, 2018 in Faith, Healing, Power of God, Spiritual Walk, Word of God