RSS
← The Power of Prayer in the Spirit
Faith + Love = Growth → 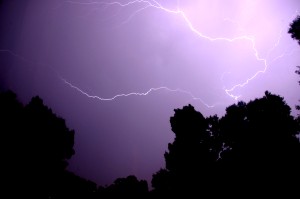 Imagine if you were a general at war with another country.  What if you could control the weather?  What if you could hit their country with a category 5 hurricane the day before your attack?  Do you think it would increase your chances of victory?  Believe it or not, we can operate in this scenario in the spirit.

In my last post, I talked about the cumulative effect that takes place when believers pray in the spirit corporately.  There’s an exponential increase as we come together and pray.

Think about it.  When Jesus walked the earth with His disciples, He limited Himself to the power of one man yielded to the Spirit.  When He prayed, He prayed as a man empowered by the Holy Spirit.  The result of the Lord’s ministry was tremendous.  Yet, when He ascended into heaven there were only between 100 and 200 believers.

When the day of Pentecost came, they were all together in one place.
Acts 2:1

After Jesus ascended to heaven, He told His disciples to wait in Jerusalem for the Gift of the Spirit.  Nobody knew what He was talking about.  Not the disciples, and certainly not the devil or his dark kingdom.

On the day of Pentecost, there were 120 people in the upper room praying expectantly.  I’m not going to show you the math, because that’s boring.  Suffice it to say, that if you calculate it out like the wind equivalent, this small group of believers had about 10,000 times the prayer power of Jesus by Himself.  Why do you think the Bible records the following?

Suddenly a sound like the blowing of a violent wind came from heaven and filled the whole house where they were sitting.
Acts 2:2

Something happened that had never happened in the history of the universe.  Satan didn’t see it coming; he had no advance warning.  120 believers aligned their spirits with the Holy Spirit all at the same time.

They generated a “spiritual wind” with a force like never before experienced.  I can just imagine demons blowing in all directions out of Jerusalem!  This is why there was such a great effect on the Day of Pentecost.

Jesus Christ had an incredible effect upon Israel.  Those who heard Him said, “no one ever spoke like this man.  We have never heard this much authority.”  Yet, after 3 years of ministry, only 120 still obeyed His instructions.

This is because, during His life, Jesus had to fight the spiritual battle single-handed.  This can still be done.  Even today Christians are finding themselves fighting hand to hand with the kingdom of the enemy.

But, when the demonic influence is blown away first, how much easier the battle becomes.  This is illustrated beautifully in the outcome of the day of Pentecost as recorded in the book of Acts.

Those who accepted his message were baptized, and about three thousand were added to their number that day.
Acts 2:41

Think about the implications of this for us today.  If we have 3000 people show up for an event and 120 are saved, we shout victory.  How about 120 people showing up for the meeting and 3000 being saved?!!!  This is the potential if we as a body of believers send a spiritual attack against the kingdom of the enemy before we do something in the natural.

Please understand this.  That first day of Pentecost took Satan totally by surprise.  Now he’s ready when believers gather for prayer in the spirit.  He instructs his minions to hang on to something while they’re praying.

I ask you then, what’s the devil’s greatest fear?  It’s simply that the church would come together and pray in unity in the spirit.

Question: Why do so few churches have intentional, corporate, prayer in the spirit?

Posted by Revzacc on October 15, 2018 in Prayer in the Spirit, Revival, Spiritual Warfare, The Church

← The Power of Prayer in the Spirit
Faith + Love = Growth →