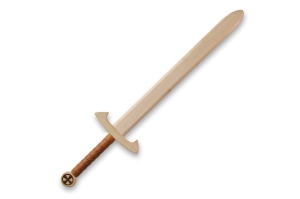 I’m continuing to look at the conflict between Adam and the devil.  It’s recorded in the title deed to earth (Revelation 6:1-2).  In my last post, we saw that the objective of the enemy was to take peace from the earth.

When the Lamb opened the second seal, I heard the second living creature say, “Come!”  Then another horse came out, a fiery red one.  Its rider was given power to take peace from the earth and to make men slay each other.  To him was given a large sword.
Revelation 6:3-4

As I’ve said previously, red is the color of sin.  Sin is missing the mark of God’s perfect will.  This is the enemy’s mode of transportation.  Questioning God’s will is the way he does things.  That’s his way of fighting the war and we need to be ready for it.

The Scripture tells us that he has some weaponry.  It’s a large sword.  Throughout the Bible, we find that words are a sword.

Please understand that the enemy’s sword is NOT living and active.  It’s not the sword of the spirit.  It has no authority behind it to pull down strongholds.

All the enemy starts with is a large sword – big words.  All he has is words.  No power, no authority, just talk.  On the surface, it doesn’t sound like he has much to work with.

As a matter of fact, when you compare it with what Adam was given, spiritual bow and arrows, the devil should have no hope of victory.  Adam has the authority of God to shut down the enemy before he even gets started.

Think about it.  We have a contest between two warriors.  One has a bow and arrows.  The other is approaching from the distance with only a sword.  Who would you expect to come out on top?

Personally, I would put my money on the archer every time.  However, a quick look at Genesis, chapter 3, will show that things don’t always turn out as they should.

Adam foolishly let the enemy get close enough to use his words.  The Scripture makes it clear that Adam was with Eve when the enemy attacked (Genesis 3:6).  Yet during the entire exchange, he kept his bow out of sight.

The enemy went to work questioning God’s Word and will for mankind.

The woman said to the serpent, “We may eat fruit from the trees in the garden, but God did say, ‘You must not eat fruit from the tree that is in the middle of the garden, and you must not touch it, or you will die.'”
“You will not surely die,” the serpent said to the woman.  “For God knows that when you eat of it your eyes will be opened, and you will be like God, knowing good and evil.”
Genesis 3:2-5

At that moment, through Adam, mankind succumbed to the enemy’s lies.  We’ve been caught in the consequences of that act ever since.

Know your enemy.  Understand his way of attacking.  We’ve been given life and victory in Christ.  Don’t let him convince you otherwise.

If the devil can convince you that the blessings of God are not for you, then he can steal your peace and everything else that goes with it.  Find out what God says about you and meditate on that.  It will give you the strength you need to walk in victory.

Question: What lies has the enemy used to try and stop you from receiving God’s best?

Posted by Revzacc on October 28, 2019 in Spiritual Warfare, Word of God