Spiritual Warfare – What it is and isn’t 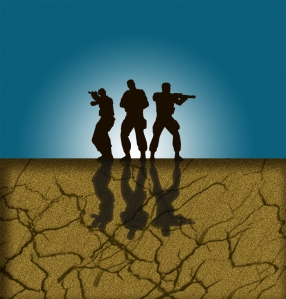 I’m posting about the spiritual battles that we find ourselves in.  Having explained the difference between the conflict in the Old and New Testament, I now want to concentrate on how we walk in victory.

The fact is that we’re in a battle.  Not against people, but unseen spiritual forces.  Do we really understand the nature of this conflict?

I’ve heard Christians use the term spiritual warfare in many different contexts.  Does our teaching line up with Scripture?  That’s what matters.

After watching many self-proclaimed spiritual warriors get flattened by the enemy, I have to ask myself what exactly is this about?  We need to base what we’re doing in the Scripture if we want success.

The Bible is clear.

For though we live in the world, we do not wage war as the world does.
2 Corinthians 10:1

Unfortunately, many take this verse too far out of context.  Then the church ends up looking like an army of clowns going off to do battle.  They’re unarmed and untrained in this spiritual war.  Then we wonder why the church is so devastated.

At one point the Holy Spirit spoke to my heart and made a statement I found hard to accept.  What I heard on the inside was, “Do you realize that there’s been no spiritual warfare for hundreds of years?”

How can this be true?  I hear people say they’re doing spiritual warfare all the time.  We sing about it.  We preach about it.

Eventually, I was able to understand what the Spirit of God was trying to get across to me.  The keyword is warfare.

In the above verse, the phrase wage war literally means to serve in a military campaign.  This is where our definition of spiritual warfare falls short.  Our skirmishes are not warfare.

According to the Webster’s Comprehensive Dictionary, war is “a contest between or among nations…carried on by force or with arms.”  That’s where we miss it.  War is between nations, not individuals.

For instance, what if I got upset about some things that Canada is doing (I’m not!).  What if I then covered myself in weaponry, Rambo style, then walked to the border of Canada and declared that I was going to war against them.  How long do you think that “war” would last?

As crazy as that sounds, that’s what many believers do in the spirit.  Then they call what they’re doing spiritual warfare.

We need to realize that true spiritual warfare will not take place until the church wakes up from its sleep.  Then, in the spirit, we must begin to pull down the strongholds of Satan.  This is not just the job of one or two bold Christians.  It’s something that the Lord is calling us all to take part in.

We can either spend our time complaining about our society or do something that will make a difference.  Time on our knees before God will bring great change on the earth.  Prayer, fasting, intercession, and prayer in the spirit are what it will take to bring revival to our land.

Over the next few posts, I’m going to talk about how we prepare ourselves for the spiritual struggles ahead.  It’s all about knowing how our attitudes, weapons, and armor work together to bring the victory we need.

Question: What’s your part in this spiritual battle?