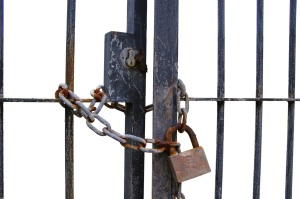 This will be my last post in the series about spiritual warfare.  I’m looking at Christ as our example.

Again, the devil took him to a very high mountain and showed him all the kingdoms of the world and their splendor. “All this I will give you,” he said, “if you will bow down and worship me.”
Matthew 4:8-9

This was probably the greatest attack the enemy could have aimed at the Lord.  Jesus knew that God’s plan called Him to buy the world with His blood on the cross.  This would be an easy way out of that suffering.  But if He took the deal He would have lost it all.

It’s clear that the final attack is aimed at the world.  Why the world?  Remember the goal…our goal is not personal comfort or the safety of the church.  What we’re fighting for is to set the captives free.

That’s why we pick up the shield and advance forward toward the enemy’s camp.  It’s to save souls.

The battle must go from personal to the kingdom.  What I talked about in my last two posts was just a defensive battle.  Now you’re at hell’s gates.  Now you’re taking something from the enemy.

Jesus said to him, “Away from me, Satan! For it is written: ‘Worship the Lord your God, and serve him only.’”
Matthew 4:10

Jesus saw through the devil’s deception.  It was all about worship.  The Lord was being tempted to pay homage to the ruler of the world.

We fall into that trap when we decide that we want to impress the world.  You can’t do both; you can’t impress them and free them at the same time.

We are here to impose God’s freedom on the enemy’s kingdom.  But we lack understanding if we think it’s like opening up a jail or a prison camp.  It’s not like that.  It’s more like an opium den.  The people we’re trying to set free are all addicts to sin, just like you and I were.  It’s destroying them, but they don’t want freedom.

By the power of God, the church is out to break down the strongholds of the enemy.  In the eyes of the world, it’s like we’re removing their supply of drugs.  It’s the sin they’re addicted to that we’re attacking.  That’s why we’re so hated much of the time.

But that’s why we’re in the battle.  It’s to save lives.  The real question of all this is; are you willing?  Are you ready and able to go to spiritual war?  This generation of America is at stake.

The Lord is looking for the faithful.  He’s calling to assemble His army.  You’re needed on the front lines.

Question: What role do you play in this war to set the captives free from their bondage to sin?

← Spiritual Warfare – It’s Bigger than Me
Help Given and Received →