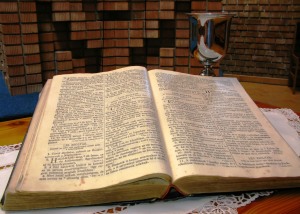 We’re continuing to look at Paul’s second letter to the Corinthian church.  He’s been sharing about his ministry.  Through his words, we can see his attitude.

Now he begins to talk about how he views the church.  We get some insight into why he writes these epistles.

I don’t think Paul knew that his writings were going to become Scripture.  He probably didn’t realize that people would be reading, studying and memorizing them 2000 years after he sent them off.

But God knew!  As the Holy Spirit inspired the apostle to write these words, He was looking forward to all who would believe and accept the Gospel of Christ.

Now this is our boast: Our conscience testifies that we have conducted ourselves in the world, and especially in our relations with you, in the holiness and sincerity that are from God.  We have done so not according to worldly wisdom but according to God’s grace.
2 Corinthians 1:12

I understand that in the context of Paul’s writing, he’s addressing his comments to the Corinthian church.  He’s reminding them of his way of ministering.

But in the greater agenda of the Holy Spirit, he’s also speaking to us.  Even though he wasn’t aware of it, Paul is explaining to us how he wants us to relate to what he’s writing.

There are two things that he received from God that he wants to shine through in what he writes.  The first is translated as holiness.  This is not the normal Greek word for holiness.  It actually means singleness; without any hidden agenda.

He also says that he writes with sincerity.  It’s a word that means clear and pure.  Paul wants to say what the Spirit is saying.

The only way he could do this was by the grace of God operating in his life.  The wisdom of the world would never give the Word that the Lord wanted to impart to the church.

Look at how Paul describes his writings.  We need to hear this as if it was written to us personally.

For we do not write you anything you cannot read or understand.  And I hope that, as you have understood us in part, you will come to understand fully that you can boast of us just as we will boast of you in the day of the Lord Jesus.
2 Corinthians 1:13-14

This is the key to the Holy Spirit’s plan in giving us the Scripture.  He gave us a written Word that we could both read and understand.

The word, read, is very interesting.  It literally means to know again.  It assumes that what is written will be reread and reviewed over and over again.

That’s the foundation for our understanding of God’s Word to us.  As we continue to read it, we begin to understand it in the way that the Lord intended us to.  The Spirit of God can bring us into the full understanding of the Scripture.

Paul ends this passage by looking forward to the coming of Christ.  When the Lord returns, there will be a great reunion.  Paul says that he will boast about God’s work in the Corinthian church on that day.

Little did he know that not only will the Corinthians boast about him, but we will boast about his work in us.  Because of Paul’s faithfulness to the Spirit, we have a clear testimony to the grace of God.

Paul’s instructions have not only affected the people of his day but have touched and changed our lives as well.

Question: How has your life been changed by studying God’s Word?

Posted by Revzacc on March 25, 2020 in Encouragement, Return of Christ, The Gospel, Word of God

← The Gift of Prayer
Spiritual Planning →

One response to “Relating to Scripture”