Separate from the World 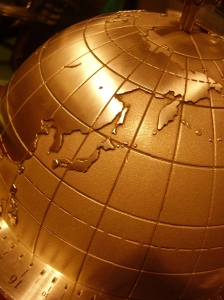 In my last couple of posts, I’ve been talking about not being too attached to the world system or people in the world.  We should have a very different mindset.  Paul continues this thought.

What agreement is there between the temple of God and idols?  For we are the temple of the living God.  As God has said: “I will live with them and walk among them, and I will be their God, and they will be my people.”
2 Corinthians 6:16

First, the apostle asks another question.  He literally asks, how can the temple of God and a temple of idols share the same opinion?

That’s a good question.  In our society, it’s sometimes difficult to see a difference between the opinions of the church and the world.  How we approach life should be based on the Word of God.

He makes it clear that we’re the temple of the living God.  The world, on the other hand, is full of idols.  The world chases after things that only give temporary fulfillment.  They can’t give us the answers to what our souls long for.

We are a people that the God of the universe lives in and walks among.  Yet, in many cases, we don’t live in that knowledge.  We are God’s people.  That makes us very different than the world around us.

Paul then makes reference to some Old Testament Scriptures.

“Therefore come out from them and be separate, says the Lord.  Touch no unclean thing, and I will receive you.”
“I will be a Father to you, and you will be my sons and daughters, says the Lord Almighty.”
2 Corinthians 6:17-18

I know there are a lot of people who use these verses to abuse other believers.  What Paul is saying is that there should be a clear separation between the church and the world.

However, what most Christians don’t realize is that in quoting the Old Testament, Paul sometimes changes the wording a little in order to bring it into a New Testament setting.  That’s the case when he says to touch no unclean thing.

This is a quote from Isaiah 52:11.  Isaiah uses a word that means, don’t come into contact with something unclean.  Paul quotes it by saying, don’t attach yourself to anything that has not been cleansed.

Then Paul adds something that Isaiah doesn’t say.  If we’ll only attach ourselves to those that are clean, God will receive us into His favor.

The second quote was a promise made to King David (2 Samuel 7:14).  The difference is that now there will be both sons and daughters of God.

The reason for these verses was not to pummel you with guilt.  Paul is using positive examples to motivate us to stay separate from the world system.  If we do, then we’ll live under the blessing of God.

Question: How should this separation between the church and the world be lived out?

Posted by Revzacc on July 20, 2020 in Relationships, Revival, Spiritual Walk