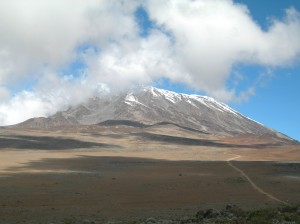 The apostles Peter, James and John had a special relationship with Jesus. Because of this, they saw and heard things that the other disciples missed out on.

One time in particular they went up on a mountainside with the Lord. They witnesses some amazing events that day. They saw Christ take on the glory He had in Heaven.

There he was transfigured before them. His face shone like the sun, and his clothes became as white as the light. Just then there appeared before them Moses and Elijah, talking with Jesus.
Matthew 17:2-3

That must have been an unforgettable experience for them. They had a new revelation of who Jesus was. This was a mountaintop that would forever change their lives.

Many years later, after the resurrection and ascension of the Lord, Peter still recalls that day. He recounts what happened in one of his letters to the church.

For he received honor and glory from God the Father when the voice came to him from the Majestic Glory, saying, “This is my Son, whom I love; with him I am well pleased.” We ourselves heard this voice that came from heaven when we were with him on the sacred mountain.
2 Peter 1:17-18

Here Peter is remembering back to the time when he and the two other apostles received a special revelation up on a mountaintop. Jesus was transfigured before their very eyes. He became robed in the majesty that was His before the foundations of the world. Peter calls that place the sacred mountain.

The fact is, we all have these places of special significance in our spiritual walk. These times with the Lord shouldn’t be lost in the past. They need to be remembered and brought with us into our destiny.

Where are your sacred mountains? Where are those special places where God’s Word to you changed your life?

Of course, because I like to hike, some of my most significant times with God actually occurred on mountains. I remember powerful times with the Lord on Mt. Major in New Hampshire, Stratton Mt. in Vermont, and Easter Mt. in Connecticut.

The problem I have is that my memory is so short. It’s easy for me to forget these deep encounters with God. Unless I record them, I will eventually lose the impact of my meetings with Him. I need to take the time to record these life-changing moments in my journal.

That’s why it’s so important for you to make note of these awesome events in some kind of journal. You can use paper and pen or one of your electronic devices. It doesn’t matter, as long as you keep a record of your important meetings with the Lord.

We must find a way to remember these special times. Make sure you keep a journal and record your encounters with the Lord. Years later you’ll be grateful that you did.

Question: What was one of your most memorable moments in the Lord’s presence?

Posted by Revzacc on April 1, 2016 in Prayer, Spiritual Walk, Worship