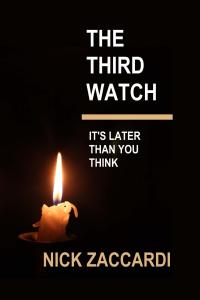 I’m pleased to announce that I’ve finally finished working on my latest book. It’s titled The Third Watch: It’s Later Than You Think.

I believe that it’s a ground-breaking book on the Second Coming of Christ. It’s unlike any other that I’ve ever read.

Many years ago I sought the Lord concerning His coming. I was confused by all the different teachings. I asked Him to make it clear to me from the Scripture.

In answer to my prayer, the Holy Spirit gave me a personal course of study that changed my life. He impressed me to take all of the teachings of Christ concerning the Last-Days, and study them in the order in which He taught them to His disciples. The result was clarity of insight that I’d never had before.

I believe that anyone who’s serious about understanding the coming of the Lord needs to read this book. I go through each teaching session that Jesus had with His disciples and put it together, line upon line, and precept upon precept.

Then, with the foundation of Christ, I look at the teachings of the Apostles. It’s amazing how closely they align with what Jesus taught. Finally, I look at the book of the Revelation.

One word of caution – by the end of the book there will be no doubt as to what Jesus and His disciples taught. I try my best to let the Scripture speak for itself. Because of that, any teaching that’s not of the Lord must fall by the wayside.

I ended up changing my whole view of the end-times. I firmly believe that this book will prepare you for the greatest chapter in church history. But you have to come at it with an open heart and an open mind.

There are many who are worried about what lies ahead of us before the return of Christ. Since I’ve been preaching this message, I’ve seen believers set free from the fear of the future. The truth is that there’s nothing to fear and everything to look forward to.

To purchase the $14.99 paperback version from Createspace – click here.

To purchase the $9.99 Kindle version from Amazon – click here.

My prayer is that it will bless you and get you ready for the most powerful time the church has ever known.

Posted by Revzacc on April 25, 2017 in Book Reviews, Return of Christ

The Resurrection – Our Great Hope

I believe in the soon return of Jesus Christ. As I see what’s happening all around us, it looks like we should be working to bring in the end-time harvest of souls. I want to take a couple of posts to talk about what Paul wrote concerning the Second Coming in his first epistle to the Thessalonians.

First Thessalonians was written because Paul went there, evangelized that area, and then had to leave quickly. We learn in the Book of Acts that persecution broke out, and the people of that region threatened to kill Paul. The church sent him out of the city very quickly.

Because of this, he didn’t have time to really establish their church the way he usually did. When things started to calm down, he began to worry about them. He was afraid that they were not grounded well enough and that they were in danger of quickly falling away.

Paul sent his spiritual son, Timothy to check in with them and see how they were doing. When Timothy came back, his report was better than Paul could have hoped for.

The church was doing great. They were established in the Lord. They weathered the persecution and they were growing in grace and in the power of the Spirit. Paul then wrote this letter to thank God and encourage their church to continue on in the faith.

When Timothy got back to Paul, he also brought some questions that the church had asked during his visit. Paul sent the answer to these in his letter as well.

One of the questions they asked was this: When Christians die, does that mean they’re going to miss out on the Second Coming of Christ? That’s a good question. Another thing they asked was; when are all of these things going to happen? When is the END OF THE AGE going to take place?

The first question he answers is about those who die in the Lord, and whether or not they miss out on the coming of Christ.

Brothers, we do not want you to be ignorant about those who fall asleep, or to grieve like the rest of men, who have no hope.
I Thessalonians 4:13

He also uses the term fall asleep. The early church used this to signify that someone was dead. They realized that when a believer dies, they don’t cease to exist but rather enter the presence of the Lord. Their body, however, looks like it’s sleeping.

They would say, “Brother John fell asleep” as a nice way of saying that he died. So in effect, Paul is giving them more godly information on those who die in Christ.

His first instruction to them is that they’re not to grieve as the world does. We are not to act as people who don’t have any hope. We have an eternal hope.

We know about the resurrection of the dead on the Last Day. Because of this knowledge, funerals don’t hold the same fear over us that the rest of the world has. We shouldn’t act like we’re never going to see the departed Christian again.

Yes, I realize that there’s a parting process. You’re not going to see that person for a long time – so there’s going to be that kind of grief. But don’t grieve as if you’ve lost them forever. Don’t mourn like somebody who has no hope.

Question: How should our future hope affect the believer’s view of death?

Posted by Revzacc on May 9, 2016 in Encouragement, Return of Christ, The Church

Are You Ready for Christ’s Return – Really?

Jesus made some surprising statements about His return.  Don’t be one of those who are unprepared for what will happen before His return.

“It will be good for those servants whose master finds them ready even if he comes in the second or third watch of the night.  But understand this: If the owner of the house had known at what hour the thief was coming, he would not have let his house be broken into.  You also must be ready, because the Son of Man will come at an hour when you do not expect him.”
Luke 12:38-40

The Lord says that His return will come when you don’t expect it.  Notice that it will not be a surprise because He comes before you expect Him.  What is going to throw people off is that He will arrive later than they thought it would be.

The second watch of the night is from 9 o’clock to midnight.  The third watch is from midnight to 3 in the morning.

What if I said to you, “Can I come over your house tonight?”

“Sure,” you reply and you wait for me to show up.  7 o’clock, 8 o’clock and 9 o’clock go by.  At that point you’ll probably shut the porch light off.  At 11 o’clock you will probably be in bed.  If I then bang on your door at 3 o’clock in the morning, I’m sure you wouldn’t even get out of bed to answer the door, even though I told you I was coming.

That’s what Jesus is saying.  He’s telling us that He’s coming later than we think.  Most people would think that if you’re going to come for dinner you should arrive early.

Naturally, we think “suppertime.”  But Jesus is asking how long after the suppertime is past are we prepared to wait?  There will be a time when people start thinking that Jesus should be here by now, but He’s not.  It’s midnight.  A lot of people have these religious clocks that are set at five minutes to midnight.  They think that the Lord is coming soon – at midnight.

I’ve got news for you.  The Bible says He might come as late as 3 in the morning, spiritually speaking.  There are many Bible teachers who have taken certain future prophetic events and defined them as occurring “after midnight.”

Someday the “prophecy clock” will strike midnight.  If you’re one of the people who believe that He’s going to be here at this prophetic midnight, you might be disappointed.  We’ve got to be careful.  Most of Christianity is expecting Him to come at this midnight hour.

Jesus said, “I’m going to come later than you think.”  As a matter of fact, what you’re going to find as we go through these Scriptures, is that whenever Christ warns us about being ready, He always qualifies it by saying that He will come later than we’re expecting.

Question: How far are you prepared to go if Christ delays His second coming?