The Last Days – Two Kingdoms Side by Side 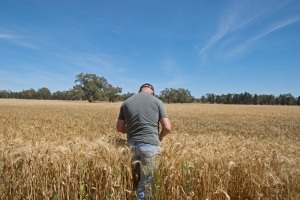 I believe that we’re in the Last Days before the return of Christ.  Did you know about the weeding that is going to take place in the Last Days?  Christ taught about it during His earthly ministry.  Very few people talk about it because it doesn’t fit into their view of the end times.

I want to take a few posts to examine this important concept.  I think that it’s important for every believer to know what to expect on the road ahead.

The following is based upon the events and teachings found in the Gospel of Matthew chapter 13 and verses 24-41.  I encourage you to read that passage first, before continuing this post.  You will have a greater understanding of what I’m saying.

This is actually the second teaching given by Jesus concerning the last days.  He gave it to the disciples in parable form.

At this point the disciples already knew that there would be a day of resurrection sometime in the future.  They knew that on that day the graves would be opened.  Someday all believers will rise with a new resurrected body.  In this teaching, Jesus builds upon that knowledge.

In the parable, the Lord teaches about a farmer who sowed good seed in the ground.  Secretly, an enemy sowed bad seed during the night.  When asked what he would do about it, the farmer said that he would let both plants grow together until the harvest.  That way he could tell the difference between the weeds and the wheat.

The disciples had no idea what Jesus was talking about.  Later on in the day, the disciples found themselves alone with the Lord.  They took that opportunity to ask Him about it.  It’s Jesus’ explanation that I want to talk about.

The kingdom of God and the world are both headed in opposite directions.  They have two different kings and vastly different goals.  As we approach the end, both kingdoms are going to start developing to the point where they’re bearing fruit.  The closer we get to the return of the Lord, the clearer we will see both the church of Jesus Christ and the world for what they truly are.

It is the overlap of the world and the church that causes the problems.  This parable addresses what God intends to do about it in the Last Days.  This is a very important subject.  If you haven’t already done so, subscribe to this blog for email delivery, so you won’t miss any of the posts.

Question: How have you experienced the tension between the kingdom of God and the world?

Posted by Revzacc on January 9, 2013 in Return of Christ