Have You Set Yourself Up as a God? 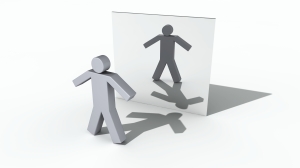 In my last post, I talked about lawless mankind setting himself up as a god in the church.  This is to happen in the Last Days, which I believe we are currently in.

He will oppose and will exalt himself over everything that is called God or is worshiped, so that he sets himself up in God’s temple, proclaiming himself to be God.
II Thessalonians 2:4

I mentioned that some believe this verse is talking about the Temple in Jerusalem.

Let me ask you a question.  What if you heard on the radio that the Jew’s just finished a secret reconstruction of the temple?  Let’s say, for the sake of argument, that they took over the whole Temple mount and expelled all of the Moslems who are now in control.

My question is this – would that be God’s Temple?  The answer is simple.  No, that would be the Jew’s Temple.  They could begin offering up sacrifices, but it would mean nothing to God.

No fire would fall from heaven to consume the sacrifice.  As far as God is concerned, it would be just another building.  It wouldn’t be God’s Temple.

What Paul is talking about here is that lawless man, who sets himself up against God, will even get into the Church.  I’m going to say something now that’s going to get some people mad at me.

Think about it, man setting himself up against God.  There are Churches across the country today who decide what to do as a Church by having a vote.

Did they pray about it to see what God wants them to do?  Do they say, “Let’s have fasting and prayer for wisdom and guidance of the Holy Spirit?”

“Do you think we should have an evangelistic outreach in our neighborhood?”

“Well, I don’t know.  This church building could sure use another coat of paint on it.  Maybe we should do that first and then in a couple of years we’ll see about reaching our community.”

“Why don’t we pray about this?”

“No way!  I put my money into this building, and I’m going to decide what will happen to it.”

Sad to say, this is how many churches around the country are operating.  This is not what I read in Scripture as a Christ-centered church.  God wants a praying church where our goal is to hear God’s will.

It’s a church where the leadership has the freedom to seek God.  Then, as godly men and women (who are actually doing the work of the ministry) bind their hearts together seeking God, they’ll see the Spirit of the Lord leading and directing their steps.

That’s the way it should be, but there are churches over which man has become the head.  Mankind has set himself above God in God’s Holy Temple.  That’s a scary thought.

I don’t want to find myself in the position of telling God that I can run His Church better than He can.  I believe this is what Paul was talking about in the last days.  People are going to be running their church, the way they want to, giving no thought to what God says.

They have set themselves up in God’s Temple, effectively proclaiming themselves to be God.  I believe that many church people in the USA have placed themselves in a very dangerous position.

Question: How have you experienced man running the church in place of the Holy Spirit?

Posted by Revzacc on October 31, 2018 in Ministry, Prayer, Return of Christ, The Church

← Mankind Exalted
The Rise of Lawlessness →

One response to “Have You Set Yourself Up as a God?”